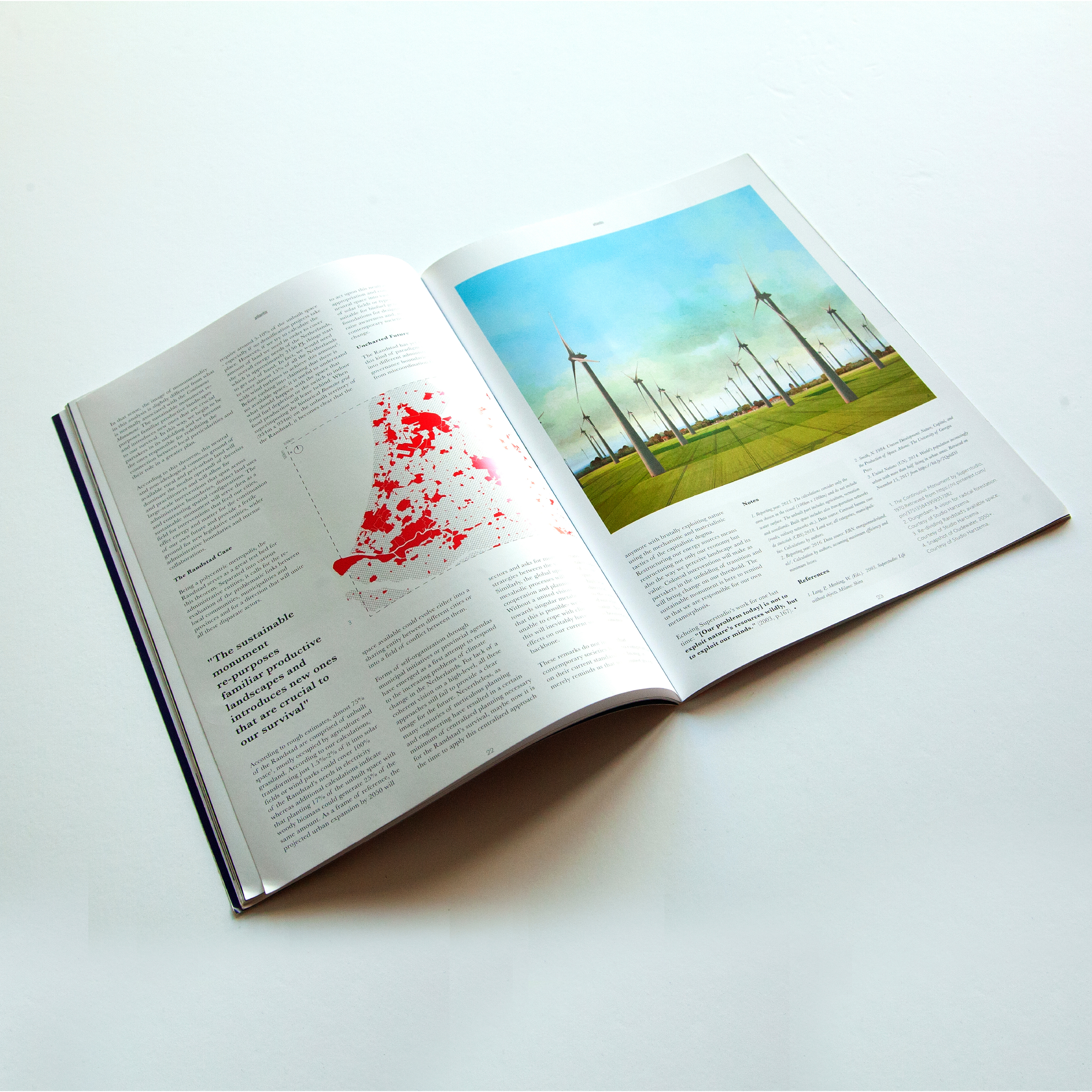 In the light of climate change, ecosystem derangement and weakening of local economies in the name of globalization and free trade, contemporary urban agglomerations seem to be better linked to the planetary network of supply and production than to their surrounding contexts. In view of this global “upscaling” of socio-metabolic processes –or, of what Neil Smith (1993) called “jumping scales” of the capitalist urbanization- a new conceptual framework for architects and urbanists emerges: the scale-less nature of the urban in the Anthropocene.

Put in this context, future architects and urbanists will need to address globalized urbanization as a united, multi-scalar field of cascading resource streams, materials and metabolic flows. Almost 50 years ago, Superstudio had already started addressing the issue of globalized urbanization, illustrating a world rendered uniform with a Continuous Monument shaped by “technology, culture and other inevitable forms of imperialism” (2003) [1971]. Today, reversing the idea of a monumentality associated with extreme urbanization, this project offers a different vision: the image of a uniform landscape defined by a sequence of interlinked, uninterrupted interventions shaping a sustainable monument for the 21st century.

What appears to be unprecedented for humanity today is that, for the first time, the majority of human population lives in urban areas, a proportion that is expected to reach 66% of the world’s population by 2050 (UN, 2014). As urban agglomerations continue to grow, cities appear to be better connected to the planetary system of production and trade than to their surrounding hinterlands. Undoubtably, this abrupt socio-metabolic upscaling towards global supply chains reduces nature to an extensive operational landscape and brings about a series of severe environmental problems; low-oxygen zones, global warming, sea-level rise and contaminated crops are just a few of these urgent issues parading in contemporary urban agendas.

Despite the fact that these problems can be seen across multiple spatial scales and locational contexts, theorists and professionals within the field of architecture and urbanism still seem to not fully understand the required arsenal of tools with which to embrace today’s world of hybridity. The current disconnection between policies and actions taken, as well as the lack of a market for renewable energy and the limited receptiveness by various representatives of the business and the political world constitute considerable obstacles towards a more sustainable future. The biggest obstacle of all, however, is the lack of clear image of what this future would look like. Although fragmented versions of smart cities, wind parks and solar farms are offered generously by various design agencies, municipalities, energy companies and governance institutions worldwide, the gap between high-level decision-making and processes of self-organization at a local scale is wider than ever.

The key to imagining a sustainable future is to understand the complexity of the problem as a whole. Critical challenges arising from climate change problems require a radical reconfiguration of our socio-economic structures and a redefinition of our way of living; thus, fragmented actions could only prove relevant if they become part of a wider plan or an integrated network of actions.

By superimposing a single gridded monolith on a series of urban and rural territories, Superstudio managed to reveal the image of a uniform, neutral space on colossal scale, which eradicated any pre-existing conditions and stressed the need to explore the intersection between global abstraction and local specificity. The same way Superstudio’s Continuous Monument provided space for a new democratic and egalitarian society, contemporary societies ask for space that will accommodate the desired energy transition and will facilitate the necessary systemic and spatial changes. Although at first glance one might argue that there is sufficient space (at least on a global level) to allocate all the necessary interventions -food production, solar farms, wind parks, forests etc.-, it is crucial to understand that  the discussion does not revolve [only] around the quantitative aspect of space; it primary hinges upon the definition of space as a landscape that entails legal systems, emotions, cultural values and symbolic meanings.

In that sense, the image of monumentality in this analysis is slightly different from what is normally associated with the Continuous Monument. The sustainable monument repurposes familiar productive landscapes and introduces new ones that are crucial to our survival. In this way, we begin to be partakers in its unfolding and we become the ones responsible for redefining the connection between local particularities and their role in a greater plan.

According to this theorem, this neutral and non-ideological common ground of available rural and peri-urban land will dominate the modus operandi of theorists and practitioners and will allow for large-scale interventions that span across administrative boundaries, distinct land uses and contrasting spatial configurations. The sustainable monument will serve then as a field for interventions that feed our cities, offer energy and matter for the continuation of our own future and provide a fertile ground for new legislative entities, wider administrative boundaries and intense collaborations.

Being a polycentric metropolis a priori, Randstad serves as a great test bed for this theorem. Separated into various administrative entities, it calls for the re-evaluation of the problematic links between local communities, municipalities and provinces and for a direction that will unite all these disparate actors.

According to rough estimates, almost ¾ of the Randstad are comprised of unbuilt space1, mostly occupied by agriculture and grassland. Transforming just 1.5%-2% of it into solar fields or wind parks could cover 100% of the Randstad’s needs in electricity whereas additional calculations indicate that planting 17% of the unbuilt space with woody biomass could generate 25% of the same amount. As a frame of reference, the projected urban expansion by 2050 will require around 5-10% of the unbuilt space -especially if no densification projects take place. However, if we try to calculate the amount of land we need in order to cover the overall energy needs of the Netherlands, which is approximately 3150 PJ, things start to get out of hand. In fact, we would need to cover almost 15% of all the Netherlands with wind turbines to achieve this amount2. Before rushing into claiming that there is no available space, it is useful to understand what should happen with the space that fossil fuel depletion or the switch to indoor food production will leave behind. When superimposing the historical Beemster grid (934m x 934m) on the unbuilt territory of the Randstad, it becomes clear that the space available could evolve either into a sharing entity between different cities or into a field of conflict between them.

Forms of self-organization through municipal initiatives or provincial agendas have emerged as a first attempt to respond to the increasing problems of climate change in the Netherlands. For lack of a coherent vision on a high-level, all these approaches still fail to provide a clear vision for the future. Nevertheless, as many centuries of meticulous planning and engineering have resulted in a certain minimum of centralized planning necessary for the Randstad’s survival, maybe now it is the time to apply this centralized approach to act upon this neutral field. A large-scale appropriation and conversion of Randstad’s neutral space into vast forests, arrays of solar fields or types of biomass crops suitable for biofuel generation will set the foundations for designing energy transition, raise awareness and, most importantly, help contemporary societies embrace radical change.

The Randstad has yet to experience this kind of paradigm shift. Divided into different administrative entities and governance boundaries, it is often suffering from miscoordination between different sectors and asks for more integrated strategies between the various stakeholders. Similarly, the global upscaling of socio-metabolic processes will also require cooperation and planning on a high level. Without a united vision and a direction towards singular metabolism -to the extent that this is possible- we will find ourselves unable to cope with climate change. And this will inevitably have serious boomerang effects on our current socio-economic backbone.

These remarks do not imply that contemporary societies have to compromise on their current standards of living; it merely reminds us that we cannot go on anymore with brutally exploiting nature using the mechanistic and materialistic tactics of the capitalistic dogma. Restructuring our energy sources means restructuring not only our economy but also the way we perceive landscape and its value. Colossal interventions will make as partakers in the unfolding of transition and will bring change on our threshold. The sustainable monument is here to remind us that we are responsible for our own metamorphosis.

Echoing Superstudio’s work for one last time: “[Our problem today] is not to exploit nature’s resources wildly, but to exploit our minds.” (2003, p.167).

United Nations (UN). 2014. World’s population increasingly urban with more than half living in urban areas. Retrieved on November 15, 2017 from https://bit.ly/2QnhlD3